It's been almost six years since I last painted some Dwarves! Reinforcements for Durin's Folk are really long overdue, but soon they can take the field with an even bigger host! Here is the first 12 figure shield wall unit of offensive heavy foot/expert sergeants or whatever we want to call them. Even though axes are iconic with Dwarves, I think a tight wall of shields with spears would be most useful in a tunnel. As a Dark Ages Re-enactor explained, two handed axes in your shield wall are very useful for knocking the other side's shields down so the spearmen can jab him. Thus the inclusion of the champion with the axe. 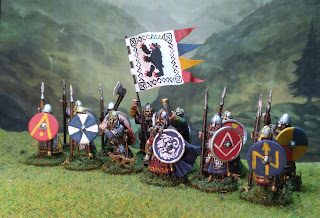 This unit is made from two packs of Conqueror Model dwarf spearmen with some command and a figure from the Heros pack. I had a lot of fun painting the captain's cloak and shield, which is supposed to be a wolf curled around the shield boss and  biting it's tail. 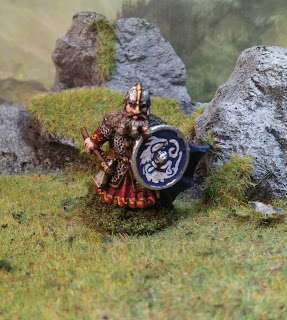 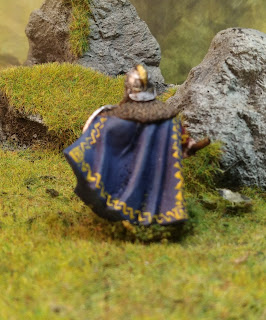 Fairly basic designs for the rank and file spear carriers, very much inspired by Viking era shields. I sprinkled some runes on them which may just be identifying their kit.

Some have the triangle motif which makes me think of mountains.

When complete, I will have four such units. One banner for each featuring either a bear, raven, wolf or ram. 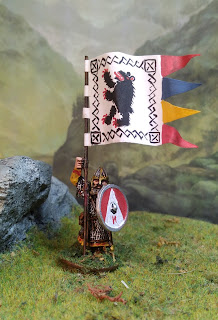 The flag is inspired by a flag I painted earlier this year for some Medieval Swiss troops.